WILL THE BULGARIAN ARMED FORCES GO ON RUSTING OUT DURING THE THIRD TERM OF OFFICE OF THE PRIME MINISTER BOYKO BORISSOV?

the Atlantic Council of Bulgaria

Following deliberations at a Defense Council meeting at the Ministry of Defense in April, the Minister of Defense launched a procedure aimed at obtaining formal approval for the investment project regarding the acquisition of armored fighting vehicles for the Armed Forces as well as the amended investment project concerning the acquisition of a new type of fighter aircraft. A couple of days ago, Minister Karakachanov had declared that these projects would be discussed at the Council of Ministers’ meeting that is scheduled to take place on May 9th, 2018.

The public information on the two proposed large-scale projects is limited. In addition thereto, high-level representatives of the Executive power as well as leaders of parties represented at the National Assembly have been questioning the necessity to proceed with rearmament and with increasing the Bulgarian defense expenses.

In this respect, the Atlantic Council of Bulgaria recalls that at the NATO Summit in Wales in 2014, in view of the complex security environment in the wake of the illegal annexation of Crimea by the Russian Federation, the NATO member states committed to attain and maintain a level of defense expenditures of no less than 2% of their GDP.

As a positive example can be pointed out Romania which, under similar conditions, decidedly raised its defense budget (Figure 1) and adopted an investment program till 2026 that has the financial value of € 9.8 billion. Nevertheless, on the other hand, Bulgaria went on reducing its defense spending as percentage of its GDP. The additional BGN 562 million that were allocated in the state budget, in order to start the main rearmament projects in the course of the two consecutive fiscal years of 2016 and 2017, were not spent as initially planned. What is more, a part of this sum was reallocated to cover expenses for repairs and maintenance of the MiG-29 jets (BGN 70 million in 2016). The National Plan for Increasing the Defense Spending to 2% of the GDP until 2024, adopted by Government on January 4, 2018, de facto envisages the bulk of the rise in defense expenditure to take place after 2021, i.e. following the end of the term of office of the incumbent government. (The Atlantic Council of Bulgaria has already issued a special position on this topic). 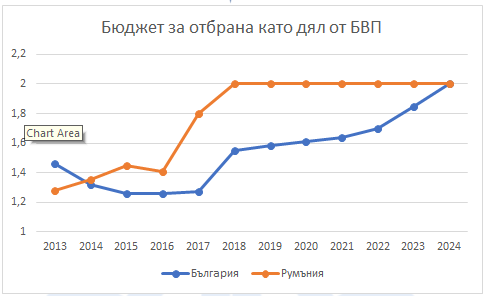 The difference between these two defense expenditure profiles equals BGN 3.265 billion. This sum would be fully sufficient to make payments during the period of the main rearmament projects of the three Services of the Bulgarian Armed Forces.

The available public information on the new type of fighter aircraft acquisition project for the moment does not justify particularly optimistic expectations. We are hearing yet again words about making comparisons between second-hand and newly made jets as well as talks about the need to proceed with the acquisition of only eight (and possibly more) fighter jets instead of buying the estimated sufficient number of 16. The main problem in the acquisition procedure is not debated. This is the problem with the over-centralization of powers in an expert body, i.e. the Project Management Board. A separate detailed analysis thereon has already been published.

The information made public concerning the rearmament of a mechanized brigade is even scarcer. It is obvious that a significant number of world leaders in the production of armored vehicles are interested in this project. At the same time, launched are ideas on modernizing 40 to 50 years old equipment, together with ideas on producing new vehicles in Bulgaria. Launching ideas on modernizing legacy vehicles that have a “museum value” diverts the attention from the serious necessity to proceed to rearmament of the Land Forces with modern equipment. The Land Forces bear the main burden regarding the participation of Bulgaria in NATO-led operations as well as in the implementation of our allied obligations.

The Atlantic Council of Bulgaria welcomes the intention to provide for the participation of the Bulgarian defense industry in the main rearmament projects. We expect that such participation should accelerate the implementation of two main goals:

We emphasize that the aspirations to achieve additional objectives, such as building up capacity for autonomous production and follow-on competition in selling final products to the global armaments markets, is related to incurring enormous risks regarding both the planned expenses and the attainment of the operative requirements, and later on concerning the projected economic ambitions.

Our general view is that, in the course of the past year, the Ministry of Defense has been working on the main modernization projects without having received clear guidance from the Council of Ministers. The latter is the collective body that is responsible for the formulation and implementation of the defense policy of Bulgaria as a member of NATO and EU.

Regrettably, nowadays we cannot reject the prospect that the acquisition procedures concerning the two projects (fighter jets and armored fighting vehicles) are not carried out by the end of the current year. If this proves to be true, the Government would not only yet again “save” BGN 370 million, earmarked in this year’s budget for rearmament of the Bulgarian Armed Forces, but it would also mean that Boyko Borissov would go down in History as the longest-serving Bulgarian Prime Minister, during whose term of office the Bulgarian Armed Forces would not acquire any new piece of armament and equipment.

Categorised in: National and international security